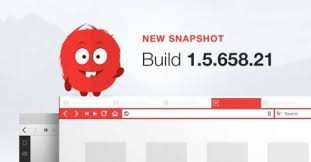 After Vivaldi 1.4, we have another promising release from Vivaldi team, Vivaldi 1.5 stable version based on Chromium 54 has been released for Windows, Mac and Windows platforms and available for download with new features, improvements and bug fixes. This version brings smaller updates for Windows, Reader Mode, adds support for tab dragging and Chromecast support and more.
Delta updates: With the new update system, Vivaldi users on Windows from this version onwards, receive smaller updates. For instance, the next update stable version users going to get will be very small, will be of KB in size. Instead of downloading the whole installation, the changes between two builds will be downloaded.
Vivaldi has got Reader View which Firefox browser already has and Chrome doesn’t. Chromium based Vivaldi implemented it neat! It’s not fully perfect yet.
This version of Vivaldi finally allows to drag tabs between windows.
Automatic screenshots in notes: ” If you add a note from selected text on a web page, the note will automatically include a screenshot of the page.”
Search with option now available in the Context menu, so for a selected text on the page you can now able to perform a search with the search engine Yahoo or Wikipedia or Google or DuckDuckGo or Bing.
Vivaldi has lazy load restored tabs setting enabled by default, as a result, background tabs from last session won’t be loaded until and unless you select them. This speeds up Vivaldi browser’s loading on startup.
With support for inline editing of bookmarks and notes, you can edit bookmarks or notes easily. To edit a bookmark, visit bookmarks manager or panel, select a bookmark and press F2, type a new title for the bookmark. This way, you can edit note titles as well.
Source